The devil is in the details

Created and launched in Quebec in 2019 by St. Lucifer Spirits (SLS), Dirty Devil Vodka is an innovative spirit made with 100% corn and blended with Hyper-Oxygenated water – a patented process that yields water with five times the oxygen of ordinary or even spring water. The result is an award-winning vodka with a distinctively smooth and sumptuous finish.

The water is then blended and rested for six weeks with our base spirit which has been five-times distilled and three-times filtered.

The Hyper-Oxygenated water is the result of years of research and development by our genius scientist and friends.

“We start with a super purification system that produces the highest quality of water,” explained Daniel Sdicu, Biologist/Chemist, Dirty Devil Vodka’s genius scientist. “The water is then speed chilled to 4 degrees Celsius and is passed through our plasma reactor. This process changes the molecular structure of water by imbuing it many times the oxygen of normal water. The resulting Hyper-Oxygenated water is then blended with a high-quality gluten-free alcohol and bottled at 84 proof.”

Wait until you taste it! 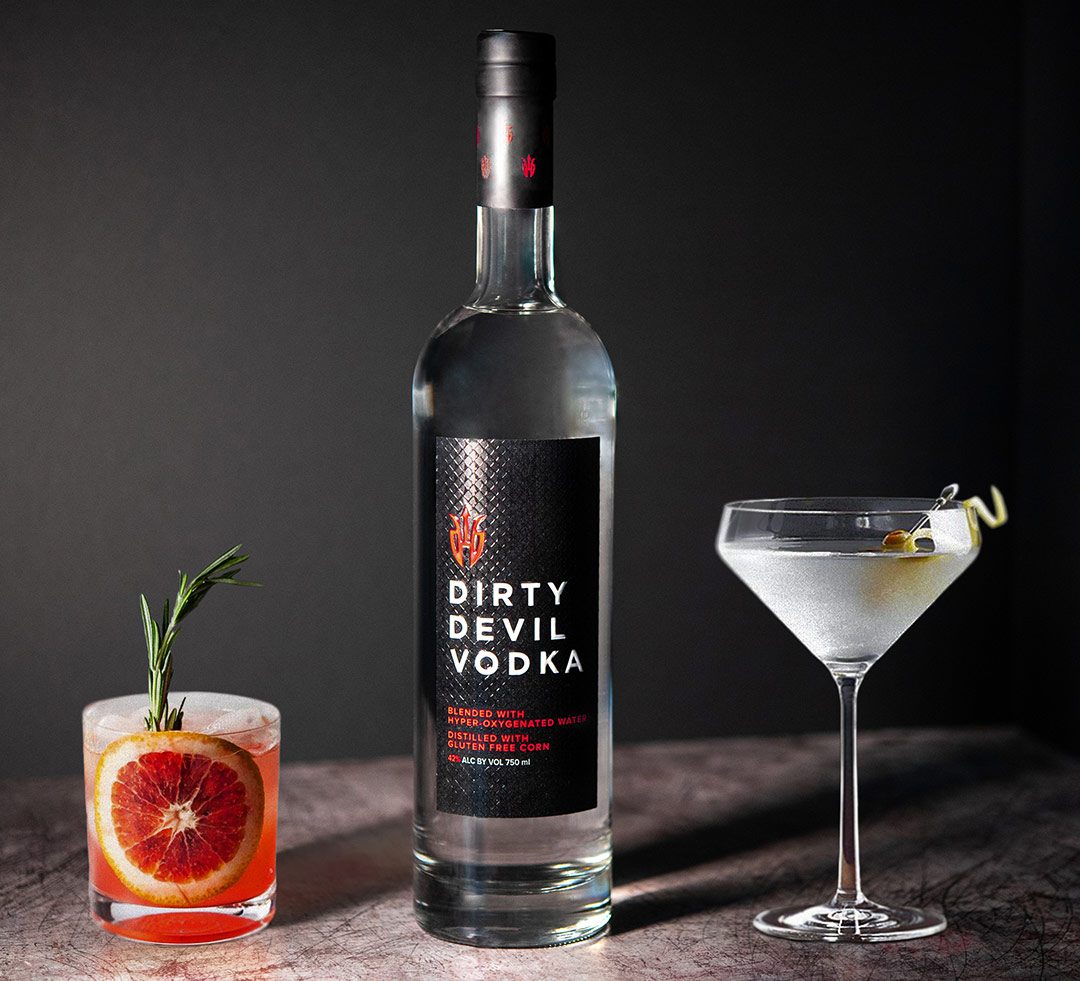 WARNING! We are about to repeat ourselves and we ask your indulgence. Dirty Devil Vodka is the first and only spirit using hyper-oxygenated water in our formulation. Unless someone is extremely devilish and steals our nano-bubbles, no other spirits company can produce a P-HOW like our P-HOW (Purified Hyper-Oxygenated Water). In all other oxygenated drinks without alcohol, the oxygen dissipates in minutes after opening. DDV always retains its dissolved hyper-oxygen level because of our (dramatic pause)… wait for it… patented process.

There are many studies about oxygenation. So, if you are interested in learning more, here are some articles about oxygenated water in general. The only claim we make is that Dirty Devil Vodka is great and made to be enjoyed with friends, responsibly.

What’s with the name?

François Tremblay, our founder, can best be described as a restless entrepreneur.

More than anything else, his interest in business start-ups has always been focused upon discovery and innovation. He told his associates, “I want to create a vodka brand with a playful edge to differentiate from and compete with top shelf brands. It has to be different, and the difference must be meaningful. It has to have character.”

François presented his thoughts to a friend, a food and beverage scientist and a renown distiller. His friend got very excited. He had just met with a fellow scientist who presented his patent to create an entirely new category by blending spirits with purified, hyper-oxygenated water. He named it P-HOW. An interesting idea but what impact would it have on the spirit?

A test batch was developed and a tasting among some friends was organized. They sipped in silence, then stared at each other in disbelief.

“What the hell is this?” said one of them. They could not believe what they had just tasted. The Hyper-Oxygenation Process delivered an unprecedented smoothness. Its mouthfeel, purity and refreshing finish made it unlike any vodka any of them had previously tasted.

François just smiled. He looked at his scientist friend, took another sip and said, “You dirty devil, this is amazing!” His friend looked at him and replied, “You just the named the brand.”

Try and keep it in your glass.

Sometimes everyone gets a little devilish.